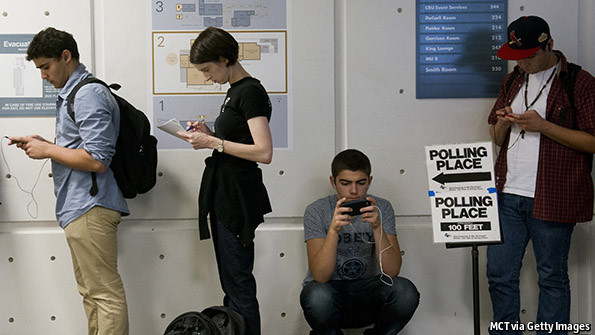 UNLIKE presidential contests, America’s mid-term elections do not seem to inspire many people. In 2012 fully 59% of registered voters turned up at the polls for the presidential election. But two years earlier just 42% bothered to cast their votes in the 2010 mid-term elections, and this year’s turnout may be even lower. Few are as uninterested as the young. In 2010 the turnout of people aged 18 to 24 was just 21%. Such low turnout means that in mid-term years, Republicans (whose voters tend to be older) dominate the ballot, even though they cannot win so easily in presidential years. In plenty of Senate races, Democrats are banking, perhaps too hopefully, on an unusually high youth turnout to win. Why is it so difficult to get young people to vote?

It is not only in America that the young do not exercise their democratic rights. In 2010 just 44% of people aged 18 to 24 voted in Britain’s general election, compared with 65% of people of all ages. In not a single European country do the young turn out more than older people. Historically, youth turnout has never been particularly high anywhere, but over the past few decades things have got worse. One explanation favoured by older people is that the young are simply lazy. But this does not make much sense. Today’s young people volunteer more than old people; they are much better educated; and they are less likely to drink excessively or use drugs than previous generations of youth. That does not seem like a recipe for political apathy.

A better explanation may be that young people today do not feel they have much of a stake in society. Having children and owning property gives you a direct interest in how schools and hospitals are run, and whether parks and libraries are maintained. But if they settle down at all, young people are waiting ever longer to do it. In 1970 the average American woman was not yet 21 years old when she first married, with children and home ownership quickly following.
Today women marry at 26 on average, if they marry at all, and are likely to want a career as well as children. People who have not settled down are not much affected by political decisions, and their transient lifestyles can also make it difficult to vote. In Britain, almost a quarter of 19-year-olds move from one local authority to another in a typical year; more still will move within the same district. If you rent a room and move often, registering to vote is a chore which is easily forgotten until it is too late. Many states in America require people to present government-issued ID in order to vote. Many young Americans do not have driving licenses, hunting licenses or passports, and it is a chore to get a special voter's ID, so many end up unable to vote. (Electoral fraud by impersonation in America is a negligible problem: such laws tend to be cynically enacted by right-wingers to suppress turnout among those that are most likely to vote against them.)

Why America's mid-term elections matter (Oct 2014)
The young in America are barely aware of the elections (Oct 2014)
Today’s young people are held to be alienated, unhappy, violent failures. They are proving anything but (July 2014)
Posted by NOTES FROM THE WILDSIDE at 2:33 PM