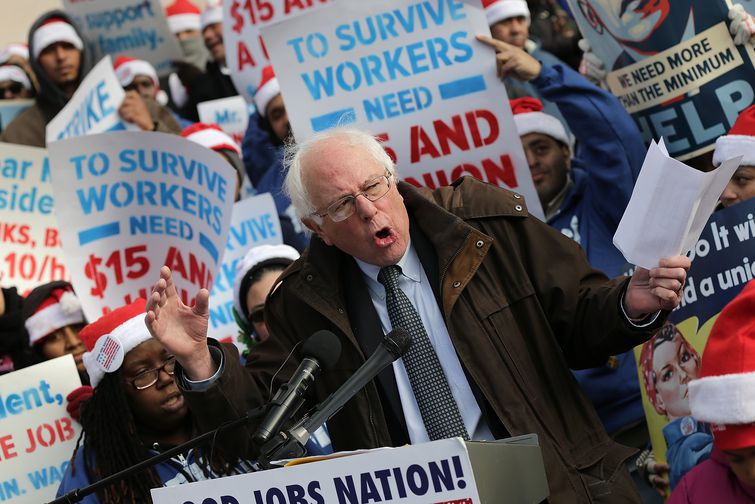 President Obama's biggest problem in the Senate is obviously its new Republican majority, but opposition from the left wing of the Democratic caucus appears to be growing too. Most prominently, Sen. Elizabeth Warren (D-MA) has clashed with the White House on a key Treasury Department position and the CRomnibus spending package. But new budget committee ranking member Sen. Bernie Sanders (I-VT) is poised to break dramatically from traditional Democratic views on budgeting, from Obama to Clinton to Walter Mondale and beyond.

His big move: naming University of Missouri - Kansas City professor Stephanie Kelton as his chief economist. Kelton is not exactly a household name, but to those who follow economic policy debates closely, tapping her is a dramatic sign.

For years, the main disagreement between Democratic and Republican budget negotiators was about how to balance the budget — what to cut, what to tax, how fast to implement it — but not whether to balance it. Even most liberal economists agree that, in the medium-run, it's better to have less government debt rather than more. Kelton denies that premise. She thinks that, in many cases, government surpluses are actively destructive and balancing the budget is very dangerous. For example, Kelton thinks the Clinton surpluses are nothing to brag about and they actually inflicted economic damage lasting over a decade.

Usually, when Democrats hire economists, they hire nice, respectable Keynesians, who use mainstream economic models and often agree with conservative economists on a lot of theoretical matters while drawing different policy conclusions from them. For example, Greg Mankiw, who served as George W. Bush's top economic advisor, and Christina Romer, who served as Obama's, were both influential in developing New Keynesianism, a macroeconomic theory that emerged in the 1980s and arguably dominates the field today. What really set Romer and Mankiw apart was policy, not economic theory.

Kelton disagrees with Romer and Mankiw on economic theory. In fact, she disagrees with just about every economist Bush or Obama ever hired about economic theory. Kelton is among the most influential advocates of Modern Monetary Theory (MMT), a heterodox left-leaning movement within economics that rejects New Keynesianism and other mainstream macroeconomic theories.
MMT emphasizes the fact that countries that print their own money can never really "run out of money." They can just print more. The reason we have taxes, then, is not to pay for stuff, but to keep people using the government's preferred currency rather than, say, Bitcoin. In some rare cases, consumer demand gets too high, so sellers raise prices and inflation ensues. Then, you need to raise taxes to cool the economy down. But the theory holds that this eventuality is pretty rare. James Galbraith, another MMT-influenced economist, once told me that the last time it happened was in World War I.

The main takeaway from this is that you really don't need to balance the budget over any time horizon, and attempts to do so will hurt the economy. That's what Kelton argues happened after the Clinton surpluses of the late 1990s / early 2000s. Any dollar of government surplus must show up as private debt, she reasons. And the private sectors just can't run up debt like that indefinitely. "Eventually, something will give," Kelton once wrote to Business Insider. "And when it does, the private sector will retrench, the economy will contract, and the government's budget will move back into deficit."

This has changed since the recession hit, but for years both Australia and Canada (whose prime ministers Tony Abbott and Stephen Harper, respectively, are pictured) ran budget surpluses without incident. (Chris Hyde/Getty Images)

Plenty of people criticize Obama's economic policies (or Clinton's) from the left, but this is very much a minority view in economics — even among liberals. Paul Krugman, for example, has argued that MMT gets this all wrong. You still need people to buy government bonds, and if the interest rates on those get too high, then paying for it all might be hard to do without triggering runaway inflation. "Once we’re no longer in a liquidity trap, running large deficits without access to bond markets is a recipe for very high inflation, perhaps even hyperinflation," Krugman writes. Joe Gagnon, an economist at the Peterson Institute, also notes that Australia and Canada ran surpluses for years without suffering economically as a consequence. (You can see MMT responses to these points here and here.)

Before recently, mainstream economists and policymakers could comfortably ignore MMT. Galbraith told me that when, on a panel for an April 2000 event at the White House, he argued that the US's new budget surplus would harm the economy, the hundreds of economists in attendance laughed in his face. That's all changed. The financial crisis created a huge appetite for new economic thinking, and MMT helped meet it. Now, people like Krugman are expected to at least grapple with its claims. Kelton's elevation to the budget committee is another important step in mainstreaming the theory, and making it safe for left-wing Democrats to embrace.

If you want to learn more about MMT, I wrote a long profile of the movement back in 2012 that explains the basics. But theory aside, in concrete political terms this is a sign that Sanders is likely to reject the consensus-oriented approach of his predecessor, Patty Murray, and produce big spending budget frameworks that many members of his own caucus — as well as the White House economic team — would reject. That's going to be a headache for an administration that would like to count on a unified group of Democrats as it heads into inevitable battles with the Republicans.

Posted by NOTES FROM THE WILDSIDE at 7:16 AM