The Lies They Told: The Untold Story of America Under Attack on 9/11

The Lies They Told

When Sept. 11, 2001, dawned, the Northeast Air Defense Sector in Rome, N.Y., went on full alert — to prepare for a training exercise that envisioned a sneak attack by Russian planes flying over the North Pole to bomb the United States, a prospect that Defense Secretary Robert McNamara had dismissed as outdated in 1966. Later that morning, after American Airlines Flight 11 and United Airlines Flight 175 had hit the World Trade Center and American Airlines Flight 77 the Pentagon, three F-16 fighter jets were scrambled from Langley Air Force Base to form a combat air patrol over Washington. But degraded radio transmission quality meant that the pilots were left clueless about the nature of their mission. On seeing the Pentagon in flames, the lead fighter pilot later explained, “I reverted to the Russian threat. . . . I’m thinking cruise missile threat from the sea. You know, you look down and see the Pentagon burning, and I thought the bastards snuck one by us. . . . You couldn’t see any airplanes, and no one told us anything.” 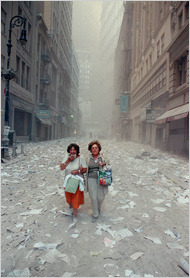 For all the trillions of dollars lavished on it, for all the talk about confronting new security threats, for all the exhortations to reinvent government, America’s defense establishment, as John Farmer reminds us in “The Ground Truth,” continued to fight the cold war more than a decade after it had ended. Preoccupied with building a costly missile defense system to counter a spurious menace from Russia and with maintaining “full spectrum dominance” over the rest of the globe, most Bush administration officials blithely ignored the danger emanating from the caves of Afghanistan, where Osama bin Laden and his acolytes plotted against America. Confronted by a small group of mostly Saudi nationals armed with box cutters, the central nervous system of the country’s defense agencies went into a state of cataleptic shock. The only decisive action taken on 9/11 came not from the military, but from the courageous passengers who stormed the cockpit of United Airlines Flight 93, leading the hijackers to crash the plane over Pennsylvania farmland before it could reach its intended target in Washington.

As senior counsel to the 9/11 Commission, Farmer, who was the attorney general of New Jersey and is the dean of the Rutgers School of Law, investigated the derelict conduct of the national security apparatus. He was well prepared to do so. In their valuable account of the commission’s activities, “Without Precedent,” the commission chairman, Thomas Kean, and the vice chairman, Lee Hamilton, noted that shortly after the attacks, Farmer — “one of our most important hires” — ­established a victims’ assistance center in New Jersey and helped the F.B.I. uncover important evidence in garbage at Newark International Airport. But the commission’s efforts to reconstruct the tragedy itself were, at best, resented and, at worst, impeded by the sprawling defense bureaucracy and the Bush administration, both of which had much to hide. Even two reports by the inspectors general of the Defense and Transportation Departments, released in 2006, whitewashed government failures. Now that numerous transcripts and tapes have been declassified, however, Farmer draws on them to assail the government’s official depiction of 9/11 as so much public relations flimflam.

Perhaps nothing perturbs Farmer more than the contention that high-ranking officials responded quickly and effectively to the revelation that Qaeda attacks were taking place. Nothing, Farmer indicates, could be further from the truth: President George W. Bush and other officials were mostly irrelevant during the hijackings; instead, it was the ground-level commanders who made operational decisions in an ad hoc fashion. The memoirs of the White House terrorism expert Richard Clarke, which Farmer credits with good faith, make it sound as though a dramatic video­conference that Clarke led played a crucial role in organizing a response to the hijackings, but Farmer says that “this account does not square in any significant respect with what occurred that morning.”

To bolster such contentions, Farmer focuses minutely on newly available transcripts from the Federal Aviation Administration and the North American Aerospace Defense Command (Norad). He shows that, perversely enough, the one defense agency that had suffered draconian budget cuts was Norad, which had seen its alert sites reduced from about two dozen to a pitiful seven and, in any case, was unable to view large areas of the continental United States owing to its antiquated radar system.

In addition, local commanders bypassed established protocols for reporting and requesting assistance for a hijacking, in part because they had so little time in which to act. Farmer superbly renders the knuckle-biting tension and confusion engendered by the hijackings, and says the leadership of the F.A.A. and the Defense Department “would remain largely irrelevant to the critical decision making and unaware of the evolving situation ‘on the ground’ until the attacks were completed” — thereby making it close to impossible for the military to inter­cept any aircraft.

Yet both Deputy Defense Secretary Paul Wolfowitz and Vice President Dick Cheney, Farmer says, provided palpably false versions that touted the military’s readiness to shoot down United 93 before it could hit Washington. Planes were never in place to intercept it. By the time the Northeast Air Defense Sector had been informed of the hijacking, United 93 had already crashed. Farmer scrutinizes F.A.A. and Norad rec­ords to provide irrefragable evidence that a day after a Sept. 17 White House briefing, both agencies suddenly altered their chronologies to produce a coherent timeline and story that “fit together nicely with the account provided publicly by Deputy Defense Secretary Wolfowitz and Vice President Cheney.”

Farmer further observes that the Bush administration wrongly asserted that the chain of command functioned on 9/11; that President Bush issued an authorization to shoot down hijacked commercial flights; and that top officials at F.A.A. headquarters coordinated their actions with the military. Farmer’s verdict: “History should record that whether through unprecedented administrative incompetence or orchestrated mendacity, the American people were misled about the nation’s response to the 9/11 attacks.”

Farmer explains that his hope is to lay some conspiracy theories to rest “by identifying and establishing the deception that actually did occur.” Surprisingly, however, he contends that the administration’s account of 9/11 “didn’t provide a pretext for aggression, as did the government’s manipulation of intelligence regarding the existence of weapons of mass destruction in Iraq.” But this isn’t quite right. There is, in fact, an intimate connection between the two.

It doesn’t require scouring the archives to notice that 9/11 was relentlessly exploited by the Bush administration to serve as the founding myth for the war on terror, which was seamlessly expanded from Afghanistan to Iraq. In retrospect, the administration’s public portrayal of itself and the armed forces as acting heroically on 9/11 can be seen as an integral part of the selling of the Iraq war.

Farmer also suggests that the cold war did not come to an end until the 9/11 attacks took place. But this, too, is questionable. In trumpeting an ill-defined war against terrorism, Bush simply transposed the bombast of the cold war to the present to suggest that he was a new Churchill staring down evil and that America needed to combat a new totalitarian threat emerging from the Islamic world. Still, Farmer’s accomplishment is to throw 9/11 into fresh relief. A precise and reliable accounting of what happened has been absent until now. This is it.

A version of this article appeared in print on November 15, 2009, on page BR16 of the New York edition.
Posted by NOTES FROM THE WILDSIDE at 2:56 PM