9/11's delayed legacy: cancer for many of the rescue workers

Will they get appropriate healthcare. The public? Our veterans? Hell no!

9/11's delayed legacy: cancer for many of the rescue workers 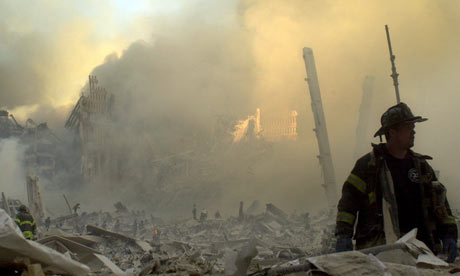 The chemicals and toxic fumes from New York's Twin Towers on September 11 2001 may have a long-term effect on rescue workers. Photograph: Graham Morrison/AP

A spate of recent deaths of New York police and fire officers who took part in the emergency operation at Ground Zero after the 9/11 attacks has heightened fears that it could be the start of a delayed epidemic of cancer-related illness.

Five firefighters and police officers, all of whom were involved in the rescue and clear-up at the site of the collapsed Twin Towers, have died of cancer in the past three months, the oldest being 44. Three died last month within a four-day period.

Those three were Robert Grossman, a Harlem-based police officer who spent several weeks at the emergency site and died of a brain tumour aged 41; fellow police officer Cory Diaz, 37; and firefighter Richard Mannetta, 44.

In addition, John McNamara, a 44-year-old firefighter, died in September; and Renee Dunbar, a police officer in her late 30s, died in August.

The cluster of cancer deaths comes as Congress is under pressure to pass legislation that would provide federal help to emergency workers who have contracted illnesses since 9/11. Campaigners hope that a bill will be put to the House of Representatives by the end of the year that would set up a $10bn (£6bn) national fund for hundreds of people who now have cancer, respiratory illnesses and other diseases that may be linked to their work at the World Trade Centre site.

Up to 70,000 people took part in the massive operation at Ground Zero, including police, firefighters and construction workers who came to New York voluntarily from all over the US. Many worked for months amid a toxic soup of dust and chemicals.

Amid the pollutants within the giant pile of 1.8m tons of debris and the surrounding air were 90,000 litres of jet fuel from the two stricken planes, about 1,000 tons of asbestos that was used in the construction of the Twin Towers, pulverised lead from computers, mercury and highly carcinogenic by-products from the burning of plastics and chlorinated chemicals.

No official tally is available for the number of those who have died as a result of the 9/11 clear-up. The New York state health department has recorded 817 deaths of emergency workers but it cannot confirm categorically how many of those were directly linked to the site.

Federal funds for ill emergency workers ran out in 2003 and, since then, the onus has fallen on cash-strapped New York city, which is facing up to 10,000 claims for compensation through the courts. Families of those who have died say that the burden should be shouldered by the nation as a whole.

Robert Grossman's father, Stephen, drew a parallel with the $3bn the federal government spent this year on buying up old cars under the "cash-for-clunkers" scheme. "They spent that, but they don't have a dime for people who volunteered after 9/11 and ended up giving their lives for their country."

The 911 Police Aid Foundation, a group run by and for sick police officers, says it is helping more than 100 officers who worked at Ground Zero and who now have cancer. The group is receiving new cases at a rate of about one a week, many of which are extremely rare at such young ages.

Michael Valentin, who volunteers for the group, spent about four months working around the pile of debris from the towers. He now has lymphatic tumours in his chest, as well as asbestos poisoning.

"We all have terminal illnesses, we are all going to die. We just want to help others by showing them that they are not alone," he said.

The bill currently before Congress, which is named after James Zadroga, a police officer who died in 2006, would provide for the health monitoring and treatment of an additional 15,000 emergency workers. Paradoxically, it would not cover cancer, which was not perceived as a priority at the time the legislation was drafted though numbers have escalated since then.

Claire Calladine, a campaigner who runs the organisation 9/11 Health Now, said the fear was that the recent rise in cancer cases was just the start.

"We have only seen the tip of the iceberg. How bad will it get – that is the big question."

Posted by NOTES FROM THE WILDSIDE at 10:48 AM